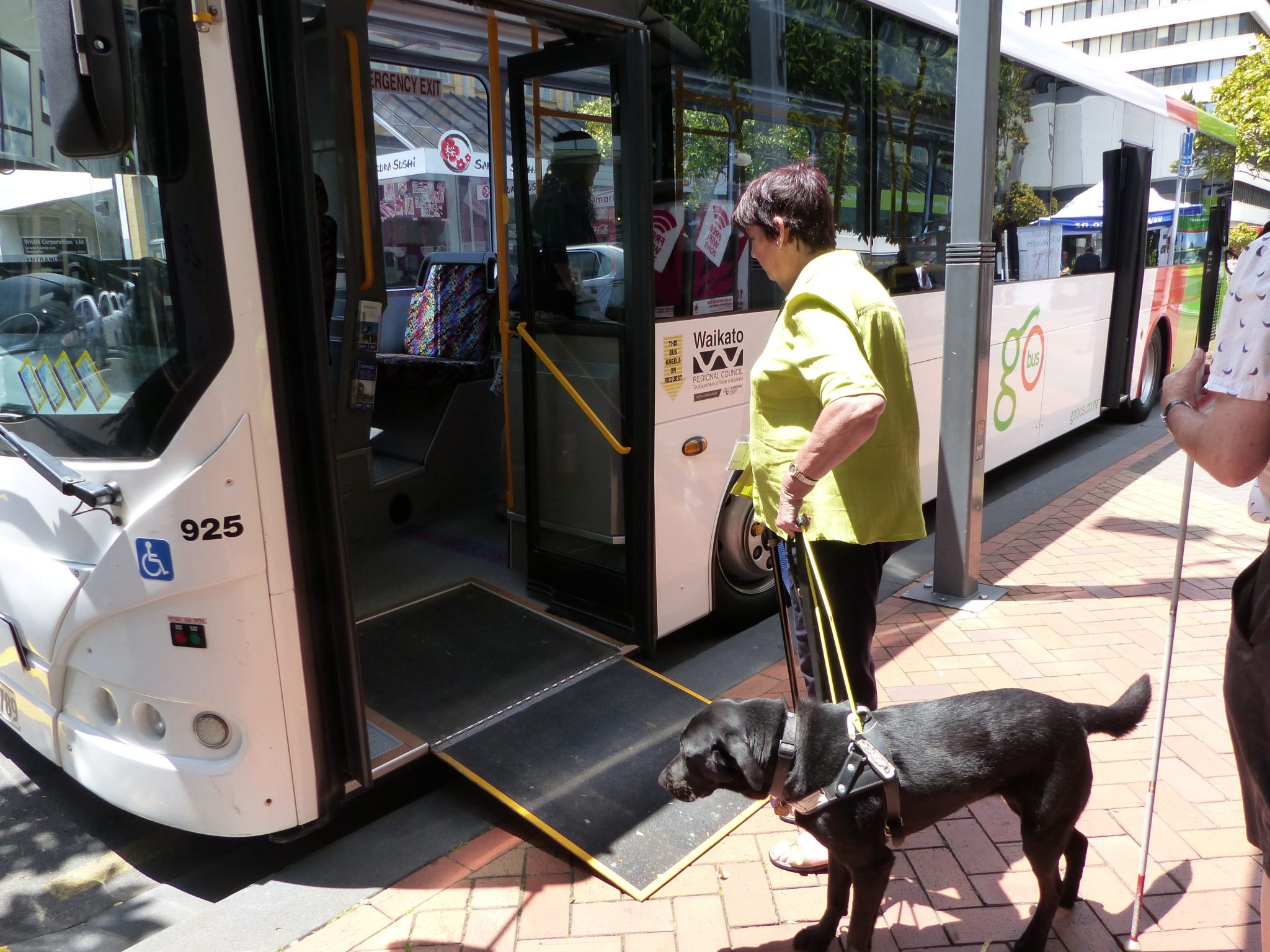 Riding buses with babies and guide dog in the 80s 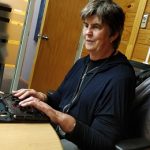 Judy Small shares some of the challenges using public transport in the 1980s.

Think back to the early 1980s. Hamilton buses were run by Busses Limited; they all left from the main street, Victoria Street outside Woolworths and McKenzie’s and the Regent picture theatre on the opposite side of the road. They were bright green, noisy, smelly and difficult to clamber on and off.

My three small children and I were well known bus passengers for many years. Going out, taking children to preschool facilities, along with visiting and shopping were important parts of my routine. My guide dog, children and I walked and bused all around town. This was before 1985 when Total Mobility vouchers were introduced. Buses were the only affordable option for my family and me during the week for travel. I was a very competent, totally blind traveller who enjoyed the freedom buses gave me.

The Hamilton local bus fleet was modern for its era. The buses ran on diesel or compressed natural gas. Their noisy, smelly motors were still in the front of the bus.  Drivers were friendly, chatty and helpful.

Buses had no level ramp access from the footpath to the bus. They often had three or four steps which were wider on one side and narrow on the other. They curled around to reduce the space occupied by the steps, making using them awkward for the less agile.

Pushchairs for toddlers were cumbersome. They hung on hooks on the back of the bus along with the occasional push bike.

As readers can imagine, getting on and off buses with a guide dog and children was a balancing act in many ways!

The driver or a fellow passenger would hang my pushchair on the back of the bus. This meant all parcels and occupants of the pushchair had to be gathered up before we boarded the bus. Once I forgot to remove two parcels from the parcel tray. I was most relieved to find them still there when we got to our destination. 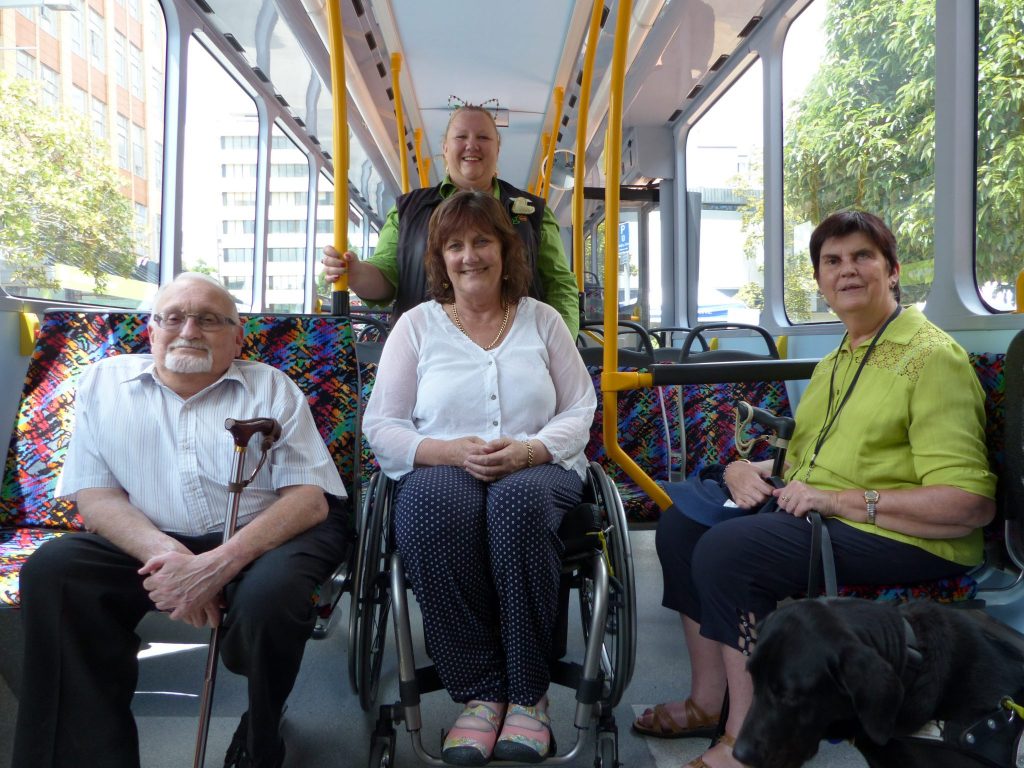 Boarding a bus could be problematic at times.  Buses had oddly shaped steps, paying cash for tickets and getting change from the driver, carrying bags of shopping and a child while keeping an ear on another child on foot was fine when it went according to plan.  It could be a chapter of mishaps and disasters if something small happened to derail the well-constructed process. It could be as small as someone distracting my dog by patting her, or a child not pleased about getting on the bus, or I could slightly miss a step or drop a coin from the bus fare change.

Finding an empty seat for my family and I was a work of art. Sometimes the seat was empty but the dog couldn’t fit under it, and often seats had one passenger in them, so not enough room for all of us! Although if I met a favourite neighbour on the way home she loved to nurse my youngest child, so we could fit in beside her.

The wheel arch under the bus intruded under the third seat behind the driver. The second seat behind the driver worked well for me and my offspring plus dog. Some drivers asked people to move which they usually did.  People I regularly travelled with were happy for us to have this seat. This situation made me feel uncomfortable if the person moving had many parcels or was elderly. After a lot of thought and discussion with friends and family (all who had different advice) I decided to take action – my first ever bit of action I had ever taken.

I discussed the situation with the manager of the bus company at Waikato Regional Council. He was a family man himself and understood our predicament.  He also knew I had used buses for many years to travel to and from my workplace.

Our conversation was centred around ‘I had a problem and could he help solve it?’ Yes, he could, and the success of the resolution exceeded my expectations.

A print sign was made and placed on all buses. It said something like ‘Please leave this seat vacant for guide dogs and their users’. It gave drivers power to tell people they had to move and often people said as I got on the bus, your seat is available. Nice one folks, as often it was warmed by the person who had recently left it for us.

This was a good outcome for several reasons.  Other bus travellers with their guide dogs benefitted as they got to use the designated seat.  Bus drivers and their passengers became aware of the issues for guide dogs travelling on buses and were willing to give up the appropriate seat. 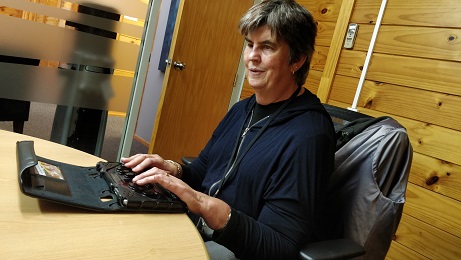 Judy Small is the Disability Advisor for the Hamilton City Council. She’s pictured with her Polaris Braille Sense device.

I learnt to read using Braille when I was six and to touch type when I was nine. Both these skills have been the key to me having a good education at secondary school and later in life at university as a mature student. While computers become more powerful, adaptable and give people more choices, Braille will never be redundant in a totally blind person’s life. Reading Braille will always add value to a person’s life opportunities such  as employment and quality of life.

I use Braille for everything, it shows me how people’s names are spelt, lets me read and keep notes in my professional life, increases my ability to work on the same playing field as my colleagues and allows me to present to audiances when the opportunity is there. Literacy and being literate is a basic essential life ingredient that opens more doors than it closes.

Some favourite pastimes that involve using Braille are doing crossword puzzles, downloading and doing complex knitting patterns, reading recipes and of course reading – anything from emails, to newspaper articles and sometimes a book!

Read our story from John McIntosh about greater choice for print disabled.

Travel subsidies for people with disability or mobility issues
June 6, 2019

Out goes the wheelchair, onto the Alinker walking bike
April 11, 2019
Online Information Hub
Search and Filter:

Want to stay connected with news and information? Subscribe to our free e-newsletters